Once you click yes you will be brought to the menu where you can select the analyses that you want to import in to. It will also allow you to point to where the Excel workbook you want to import from is located. Lastly it will display what tabs within the workbook each analysis you are importing from will pull from. 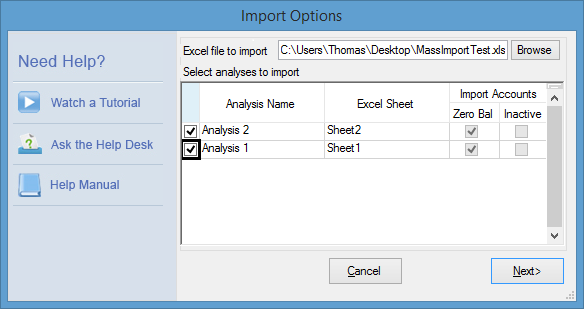 After checking off the analyses you want to import from you will then be taken to the Excel view to define the layout of the data within the tabs just like you would with the regular Excel import. Note you only define one layout so all of the data on your Excel tabs must be formatted in the same way. After you are finished with that the import utility will cycle through each analysis file, import the data, and save that analysis before moving on to the next one. Lastly you will be notified that the import is complete.

This process will update the data based on which periods you chose to import, however this process will not bring up the mapping screen. As a result if you know you have new accounts that need to be mapped in these must be added through an individual import first.