Let’s start with the example you sited from your past e-mail, personnel bonus/benefits.   Your issue was that this category was getting funneled into Operating Expenses when you wanted it to be broken out as it own separate class on the consolidated income statement. This class started out as the system generated Operating expenses row, at which point I’m assuming you renamed it to “Personnel bonus/benefits”.    While the name was changed in the analysis, the class value stored in the underlying database (used for consolidations) was still marked as Operating Expenses.  This is why these amounts did not create their own separate line on the income statement.

So to sum up the issue, system generated classes that have their names updated will not be shown as separate classes on the financial statements.  Instead these renamed classes will get rolled up into their original default value whether they started out as be “Revenue”, “Operating Expenses” or “Other Income(Expense)”.  With this in mind if you want expense rows to be broken out separately in the consolidated financials create a new class for them instead of renaming Operating Expenses. 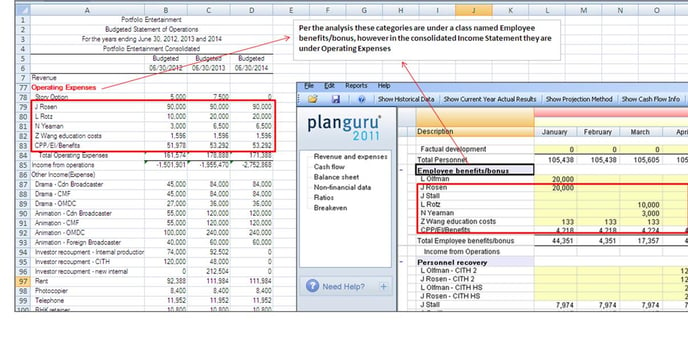